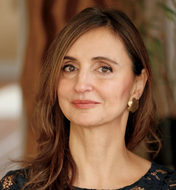 Roya Hakakian, a member of the editorial board of American Purpose, is a writer. Her opinion columns, essays, and book reviews appear in English-language publications like the New York Times and Wall Street Journal, and she has been a guest on NPR’s “All Things Considered,” among many other publications and programs. She has collaborated on over a dozen hours of programming for leading journalism units in network television, including CBS “60 Minutes.”

An active thinker of foreign relations, Roya is a founding member of the Iran Human Rights Documentation Center. She has been featured in the Washington Post and the U.S. News and World Report, among other publications. In the book Political Awakenings by UC Berkeley Professor Harry Kreisler, she has been highlighted “among the most important activists, academics, and journalists of her generation.”

Hakakian is author of two collections of poetry in Persian and is listed among the leading new voices in Persian poetry in the Oxford Encyclopedia of the Modern Islamic World. Her poetry has appeared in numerous anthologies around the world, including La Regle Du Jeu and Strange Times My Dear: The Pen Anthology of Contemporary Iranian Literature.